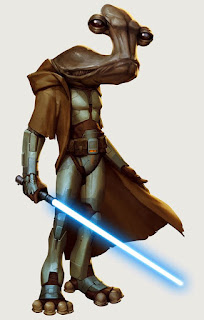 Survivalist: Begins play with an Expertise in Survival (Mind + Know + 5).

Force Heal (R: Touch / D: Instant / Cost: 2): A Jedi uses their connection with the Force in order to speed up recovery of an ally. An ally touche receives 1d8+Mind/level in healing.

Force Sense (R: Self / D: Scene / Cost: 2): A Jedi can use the Force to enhance their senses. For the duration, a Jedi has a +5 on all Perception checks (Mind + Subterfuge).

Lightsaber Defense (R: Self / D: Scene / Cost: 2): For the duration the scene, an aware Jedi may add their 'Force' skill to their Defense total as their weapon can be used to block attacks. On an enemy's attack roll that misses the Jedi by 5 or more allows the Jedi may make a free counter attack by either a melee riposte or reflecting the blaster bolt back at the enemy.

Telepathy (R: Far / D: Scene / Cost: 4 / Save: Negates): This power allows the Jedi to reach out and communicate with a target that they can sense using their minds. A target such as an ally may forgo Save if they trust a Jedi, though any unwilling target may make Will save in order to resist the Jedi's mental intrusion. Those who fail their Save may not make another save until after 1 in-game day has passed.

Notes
-Delphin is a Jedi apprentice in a Post-Imperial war where the Jedi order is being rebuilt. He is an Ithorian who has always had a connection with the Force, even while working on distant garden worlds as a groundskeeper and medic.

-Main expertise and power use is Healing, though he has successfully completed a Lightsaber in order to defend himself. His current mission has drawn him to an old monastery on a desert world where the Monks continue to make wine from desert growing cacti fruit. His search is delving into the history of the monastery and what portents it may hold for the galaxy.

-Is a coffee consumer. His soul may not fall to the ravages of the Sith, but he certainly cannot get enough dark gold to start his morning and a little extra after dinner.
Posted by Brian at 7:17 AM