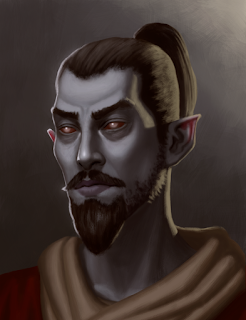 Info: AC: 15 (Scale)/ Ini: +1 / BHB: +3 / Hero: 6 / HP: 20
Scimitar: Attk: +5 / D: 1d6+2 / R: Melee
Knife: Attk: +5 / D: 1d4+2 / R: Thrown
Crossbow: Attk: +4 / D: 1d10 / R: Far
Equipment: Backpack, Canteen, Rations, Libram, Inkpen, Ink, / Wealth: 120 GP
Traits: Drow: Medium size. Normal speed. Deepvision. Drow are immune to Magical Charm and Sleep spells.
Poison (1/battle / D: Scene): Once per battle, a Drow may coat their weapon with poisons that deal +1 additional damage. Targets reduced to 0 HP either suffer unconsciousness (Sleep Poison) or take +1 Bleed Damage (Lethal Poison). Targets who are slain while poison must have the toxins cleansed before the body is revived.
Spider-kin: Spiders will never initiate an attack against a Drow (they will however defend themselves or their nests if the Drow appears to be a threat). Drow are able to communicate with spiders on a primeval level and can ride a spider if large enough. Training is Mind + Comm, Riding is skill is Dex + Phys.
Armor Proficiency (Medium): An Inquisitor may wear Light or Medium armor without extra penalties to action, attack, or spellcasting.
Attack Bonus (Melee): +1 Attack and Damage when wielding a melee weapon.
Lesser Magic (Divine): See Below
Spontaneous Healing (Cost: Mana or Turn Undead): An Inquisitor may spend mana to manifest pure healing energy that heals a touched target 1d6 + Mana Spent. An Inquisitor may also spend Turn Undead uses to manifest a healing spell that heals 1d6+2 hit points.
Turn Undead (5/Day / Attk: +6): Make a Magical Attack that affects all Undead in a Nearby radius to the Inquisitor. The Inquisitor makes an Attack roll vs. a DC equal to the various current Hit Points of the Undead. If the DC is met, the Undead flee at full speed from the Inquisitor. If the DC is met by 10+ result, the target undead are destroyed.
Magic: Mana: 18 / Attk: +6 / Save: 16
0: Detect Magic, Detect Undead, Light,
1: Bless, Burning Brand, Cure Light Wounds, Detect Alignment, Divine Favor, Resist Elements
2: Bull’s Strength, Zone of Truth
Notes
- Favedram is a Dark Elf (or Drow) who serves a Lawful entity that is tangentially connected to the Light. In essence, his divine is more concerned with law and order over compassion or charity. Favedram rejects the typical deities of the Drow who deal in the Shadow or other fiends. For his beliefs, and his willingness to use Drow techniques in the pursuit of order, he is viewed as an outcast.
- Is a member of an underground order dedicated to promoting the tenets of his divine. He is also charged with dealing with the undead lingering in the depths. He is an implacable foe to greater undead such as Liches or Vampires who dwell in the safety of the eternal darkness of the underworld.
Posted by Brian at 7:27 AM