It is Blackmoor Week 2020! Here at the Gnomish Embassy we are taking a week to celebrate the birth of one of D&D's co-creators: Dave Arneson. The man who deserves the credit as the grandfather of tabletop roleplaying, the first dungeon master, and the creator of the Blackmoor setting. Hopefully wherever he is in the outer planes, he's enjoying some quality gaming time. This week will be a series of 5e templates associated with the Blackmoor setting. Each post will have a template and a sample character. So it is yet another selection series, which has probably become my thing here at the Embassy.
Note: Rodhin was originally created by fan and forum user Zeromaru X. You can find more information on Rodhin over at the Piazza with this link. Size: Dragonborn tower over Humans and Elves, standing roughly at the same height as Orcs and Half-Orcs. Their size is Medium.

Draconic Ancestry (Brown, Grey): While the other scale colors from the PHB are available, Blackmoorian Dragonborn also include the following Scale Colors.

Brief: Originally created as a servitor race for Dragons, Dragonborn were viewed at first as a failed experiment due to explosive population that had come to dominate the peaks and valley throughout the Northern Mountains. Rodhin, the city most notable as one of the original roosts of Tsartha the Grey, who was also referred to as Scalemother Gertrude, was not the only city to house Dragonborn, it was just the largest. It remains in present day Blackmoor as a major source of unification for Dragonborn, a stymie on Afridi conquests, and player in a power struggle in the fractious region of the Northwest. Rodhin's rivals include the northern Peshwah, the Afridi remnants, holdouts from the Duchy of the Peaks, and the Orcish White Claw Tribe.

To describe the Dragonborn themselves is rather simple. They are a bipedal draconian humanoid, or a dragon's head mounted on a muscular sized humanoid body. Dragonborn tend to be naturally stronger and taller than Humans, roughly the same height as Half-Orcs, although they can be taller with the spines and fins jutting from their heads. Their scale color determines several things: what energy that will emerge from their maw as a breath weapon, what energy they are resistant too, and when referring to the Great City of Rodhin, what generally is their status within the region. 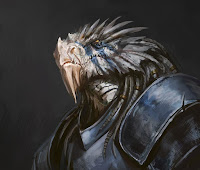 Name: Tafari Krull
Race: Dragonborn / Ancestry Scales: Grey / Class: Fighter / Level: 5 / Archetype: Battle Master / Background: Noble Knight
Attributes
Str: 16 (+3)
Dex: 10 (+0)
Con: 13 (+1)
Int: 14 (+2)
Wis: 12 (+1)
Cha: 14 (+2)
Info: AC: 19 (Chainmail + Shield) / Proficiency Bonus: +3 / Ini: +0 / MV: 30 ft. / HP: 36
Major Skills
Athletics: +6
History: +5
Insight: +4
Persuasion: +5
Longsword: Attk: +6 / D: 1d8+3 / R: Melee
Dagger: Attk: +6 / D: 1d4 / R: 20 ft.
Carbine: Attk: +3 / D: 1d10 / R: 30 ft.
Laser Pistol: Attk: +3 / D: 3d6 / R: 30 ft.
Equipment: Explorer's Pack, Lantern, Oil
Traits: Dragonborn (Grey): Medium size. 30 ft. Speed. Normal Vision. Languages include Common, Draconic, and Orc.
Breath Weapon (1/Short Rest / Save DC: Dex 12): Grey Dragonborn breath a controlled line of fire that is 5 ft. by 30 ft. Targets within the line may make a Dex save for 1/2 damage. Current damage is 2d6 (Fire).
Grey Ancestry: Grey Dragons gain Resistance to Fire.
Fighter Talents: Action Surge, Extra Attack, and Second Wind
Battle Master (Str-based / DC: 14): Commander's Strike, Maneuvering Attack, Rally
Notes: Tafari is a Grey Dragonborn adventurer and former member of the Rodhin's elite Praetorian Guard. He currently has been cut from his role as a Praetorian to serve as both an adventurer and liaison between Duchy forces, White Claw Orcs, and Peshwah who are currently operating on a loose truce to drive a spike in a weakened Afridi. He is a loyalist who must prove his devotion to his city by leaving it for a time.
Tafari's scales are Grey. Although dour looking compared to glistening golds or commanding reds, the Grey Scales of Rodhin have been blessed by sharing their color with the Goddess, Tsartha Scalemother. Grey scales span the Martial, Nobility, and Ecclesiarchy Caste due to the connections with her Eminence. Tafari's was born into a martilist family, although previous acts of valor in fighting for Rodhin have earned him a position and background as a noble knight.
One of Tafari's items as a Praetorian has been access to plundered and confiscated equipment from the City of the Gods. He carries a concealed laser pistol on his person. In addition to the laser pistol, he also carries a carbine firearm, an item he acquired in his travels made by a Gnomish gunsmith from Maus.
Posted by Brian at 6:37 PM