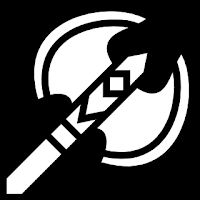 The Stoneblooded, Regency Folk, the Earthen

Size: Dwarves may be shorter than most Humans, but they tower above the likes of Halfling, Gnomes, or Docrae. Their size is Medium.

Darkvision: Can see in total darkness up to 60 ft. While in darkness, the creature cannot discern color, only seeing the world in a lit greyscale.

Resilience: Dwarves receive an Advantage on Saves vs. Poison, and they have a Resistance vs. Poison damage.

Weapon Training: All Dwarves are proficient with the Battleaxe, Handaxe, Light Hammer, Warhammer, and War Pick.

Toughness: Dwarves receive a bonus +1 HP per level they attain.

Tool Proficiency: At the start of play, Dwarves may select one of the following tools to be proficient in: Brewer's Tools, Mason's Tools, or Smith's Tools.

Brief: Northern Dwarves, also known as Regency Dwarves or shortsightedly 'Blackmoorian Dwarves', are short and stocky humanoids famous for beards, hammers, and ales. Skin tones range from fair to a deep tan, depending on the surrounding environments the Dwarf’s mountain stronghold was founded in. Their hair colors can range from shades of brown to red, with few black or blonde hairs in the mix. Men are known for beards of length, often braided by leather cords or intricate claps forged of gold, silver, or mithril. Females will often braid their hair in most settings, it is considered an act of intimacy for a Dwarven woman to unbraid their hair, and will often do so for their significant other. Dwarves of the North have their major power centers on Mount Uberstar, Black Hills, and Crystal Peaks, forming what is known as the Regency of the Mines within Eastern realm of the North. Dwarves have solid ties with Human communities, both within the rebellious Kingdom of Blackmoor and with the Thonian loyalist city-state of Bramwald, which lies north of the Mines. The Regent, Lortz Kharnundrum, balances his treaties and alliance with a strategy of friendliness and trade to both, favoritism to none, preferring instead to channeling both sides towards common threats such as the Egg of Coot or the Afridhi remnants. 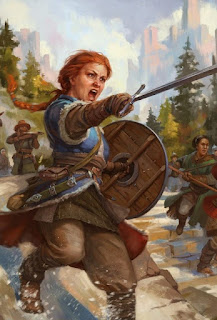 Colossus Slayer (1/round): Once per round, target creature hit with an attack takes an extra 1d8 damage.

-Hera is a member of the Hearthguard, a Dwarf who has devoted themselves to protection of the regency and warding civilians from the threats of ogres, giants, trolls, and dragons that lurk throughout the region. While he specialty is the monsters of the realm, she also has fought and bled against foes of the regency, such as the Orcish Black Claw Clan.

-She is a defender who has remained in the East while many adventurers and companies have journeyed west after the so-called Blinding of Zugzul has driven the Eye in the Dark away for a time, leaving his Afrdhi people adrift and unbalanced against a counterattack that has opened the Duchy of Ten. Yet, Hera remains as trouble always lurks in the East.

-Favors the Heavy Crossbow, but her kit includes axes and a war pick. She has a goal to retire after a period of honorable service and open a new brewery based on a few Dharkhazarak family recipes for a mellowed dark.

-During her travels, Hera has found evidence that suggest High Thane Khazakhum was not slain by Black Claws, but instead taken by another race. Following the scant clues as part of her roving, Hera is convinced (and viewed as a touch daft) that a Dragonborn city exists somewhere in and around the mountains bordering Dragonia and that the Dragon-kind have seized the Thane for some yet unrevealed purpose.