I've been running some solo sessions while it's been slow at work. I know I have had some previous solo irons in the fire, but I really wanted to try Ed Green's 'Mutant Got Gunz?' which is a one-page solo rpg that is part of the 'Searchers of the Unknown' collection. Besides Microlite, I have also held an appreciation for Searchers of the Unknown as a fine collection of micro games that I think have a fair degree of depth with just one or two notes. These sessions focus on a group of mutants living in the post-apocalypse and using experimental weapons. 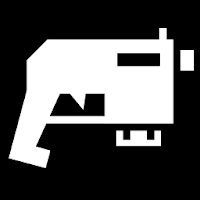 Traits (Booma): Coordinated: +1 to-hit with ranged weapons. Combatant: Booma’s begin play with a damage bonus of 1 + ½ level (round down). 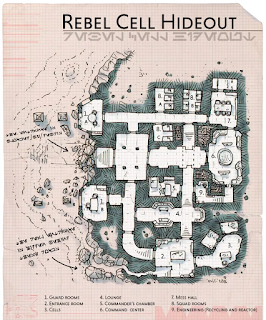 The Rebel Base Run

System: Mutant Got Gunz (Searchers of the Unknown)

Our campaign begins with a team of mutants operating out of a supply depot near the Rachel Settlement deep in the Sand Gulf and the Red Ocean. The Rachel Camp has access to one of the few working wells in the region that pumped fresh water from deep beneath the earth, an oasis for the green, blue, and red skinned creatures that dwelled in a post catastrophe world. The mountains outside of Rachel are infamously dotted with raider camps, mutant creatures, and ruins built into the sheer cliffs that bordered the narrow canyon roads. It was a fine lure for our team, a lot of supplies and equipment could be looted from the ancient bases and either taken as personal weapons, or sold at the markets of Rachel. That’s where our protagonists come in.

Marag is a grey skinned brute from the stars. The catastrophe created by an alien invasion had managed to erase both the Pure Strain, the native Human populations, as well as the Masters, the alien lords who had sought to conquer the planet. All that remained were the mutated warrior castes that were expected to fight and die for their leaders. The brutes had inherited the earth. Marag has a sharper mind due to his genetic conditioning in making him a squad leader. Those same mutations have carried with him in becoming the party leader.

Woundbrakah is a blue skinned Dokk that had been bred to fight for the Terrans (the Human natives to the Earth). He has a slender build that was common to Dokk types. He also has a fondness for carrying smaller animals, such as rodents or birds. He truly cares for these creatures and has used his expanded mind to study animal husbandry.

Krobokh is a green skinned Skavv, a shorthand term of Scavenger. The Skavvs were combat engineers during the Twilight Wars. Although he appeared as a hulking brute, his knuckles calloused from repeated blunt trauma of bashing knuckles against metal while working a wrench, he does have a savant talent in keeping mechanical and electrical devices working. He is also able to either pick locks or pick out a weak point in a barrier in order to smash his way through.

Drukor is a red skinned Booma, the same role as Marag. Red skin is a recent mutation and is associated with speed and adroitness. Something about the color red makes things move faster, no mutant, not even the few Thinkers in existence in their fortresses have yet to answer the Riddle of Red. Drukor used his speed for the benefit of the team. He is the party scout.

“I won this in a card game,” Marag declared as his thick grey digit stabbed at the button on the datapad. There was a soft whirring noise emanating from within the pad, Krobokh instinctively knew that the cooling fans located within the device were going. It was only a matter of time before the data was lost unless he could find the parts to repair the pad. At the center of the pad, the semi-sphere emitted a blue light spread and conjured a hologram readout that included both an aerial map and a schematic of yet another installation.

There was a vague murmur of agreement and minor complaints about the deserts being too hot, the animals being too hostile, and the raiders too bold.

“Come on, boys, where's your sense of adventure?” Marag asked.

Krobokh indicated the latest scar on his arm, “Got me arm nearly singed off by a burning bugger. That’s where my sense went too, boss. Up in flames.”

Yet, Marag’s persistence won out and the party agreed to head into the choking desert in the hopes of locating the ancient base.

<Krobokh attempts to repair the datapad’s cooling fan. He does have access to a few spare parts (Freebie). He rolls d20+1+4 due to his level and profession. He rolls: 15+5 = 20 (Success!) Krobokh is able to repair the cooling fan, ensuring that the holographic imagery is clearer and the equipment will not break down anytime soon.>

The party lacks the funds to hire out vehicle transport or purchase a vehicle to drive, hover, or fly out to the sight of the rebel base. The team instead uses that tried and true method of moving themselves - walking. The party leaves a little before dawn breaks and begins making their way along the trade roads. According to the map, the base is somewhere off the trade roads, past a point of interest marked as The Black Box. The party moves in the following formation: Drukor (Scouts), Marag, Krobokh, and Woundbrakah (W.B.).

< With a Scout moving in the lead, the chance of a Raider Bushwhack is a 1-in-6 chance instead of 2-in-6 chance. The roll is a 1. Even though they have a scout in the lead, 4 raiders still manage to pop out of the rocks and begin firing on the crew. >

The party was surprised and Marag was hit for ultimately 5 damage. Marag HP: 3 / 8 >

It had been sometime since Drukor had been in the field. He had froze up when he heard the first clattering of stones, signalling some movement in the boulders above them. It wasn’t until the rust red armors of the raiders appeared and the charged particles hissed through the air that the group recognized the danger. Marag was scorched for his troubles.

Drukor moved to take light cover (Def +5) and fires at Raider #1 w/ Twin Blaster (+2): 8, Natural 1 - Miss, Fumble. Drukor’s rifle burned out. He will need to have the weapon repaired before it is usable.

WB moved to cover opposite of Drukor, he tried to signal Marag to join him in order to treat his wounds. He knelt to gain full cover (Def +20).

Krobokh’s rocket rifle takes out Raider #’s 2 & 1 due the blast power of his rifle.

Drukor’s rifle has shorted out with a roll of Natural 1 and will need to be repaired.

Marag is healed 4 HP and is brought up to HP: 7 / 8. WB cannot apply anymore healing to Marag for the duration of this scene.

Raider’s cover is destroyed, exposing him to the elements.

Marag was laid out, his rifle a few inches from his grip. He had seen better days than this one.

Raider #4 attempted to flee. Given his movement speed and initiative. The others may take shots as they pleased.

Combat ends with Raider #4 making a dash through the cover of several strewn boulders that covered his egress to the upper ridgeline. Despite the fact that Marag was feeling the pain, the bodies of the fallen raiders were collected, and more importantly, their Mark III’s with the energy batteries were located on their bodies.

Mark III Blaster: Acc: +1 / D: 4D / R: Near / RoF: 1 - These weapons represent a carbine variant to a common blaster rifle that lingers in the waste, the Mark III Blaster Rifle. >