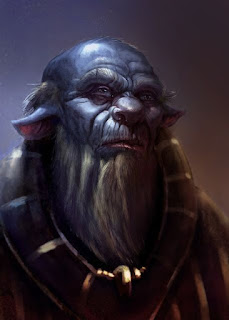 Traits (Blue): Smalls size. Slow speed. Darkvision. Naturally Psionic: +2 Save vs. Psionics. Read Thoughts (3/day): Three times per day, a Blue can read the surface thoughts of a target. Unwilling targets may make a Will Save to block the Blue from their mind.

Extend Power: Extend the duration of a power by x2 its normal duration by spending +2 Mana Points in addition to the original cost to cast.

Monster Knowledge (Aberrations): When attacking, damaging, tracking, or dealing in opposition of Aberrations, the character receives a bonus to half-level, round up. Current Bonus: +2